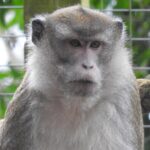 Tom was rescued from the UK primate pet trade in January 2022. Tom is the alpha male of this little group of macaques; he is a confident leader, very clever and a gentle giant. He loves food and is always the first to come and see what is on offer; he will pick out all of his favourite bits and stuff them in his cheek pouches for later! 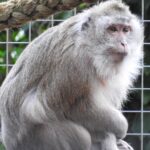 Floss is the elderly alpha female of the group. Since arriving at The Monkey Sanctuary in early 2022, she has had to learn all about balance and climbing – which took her a little while to master but she got there eventually! She is a formidable character and she doesn’t let anything hold her back. She is quite assertive with the other monkeys, but they all seem to respect her. 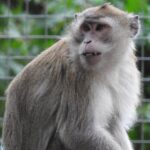 Ben is very cheeky and quite excitable, he is also very food driven. He likes to cause mischief and push boundaries wherever he can, but he does ultimately respect the hierarchy of the group. When he was kept as a pet, Ben didn’t have much space to explore and climb, so he is really enjoying investigating every single nook and cranny in his enclosures. 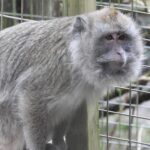 Lola is the youngest member of the group and she is very shy, nervous, and quite defensive. She is slowly letting down her guard and learning to relax and have a bit of fun, especially when she has Ben by her side! She likes to forage and explore, but only if her monkey friends are close by.