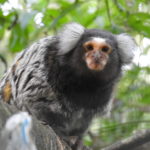 Coco was born in 2015, bred specifically to be sold into the primate pet trade. He arrived at The Monkey Sanctuary in March 2017 with Kiki; the first marmosets The Monkey Sanctuary ever rescued! Coco had been kept as a pet in Wales for two years, and for the first year of his life he was kept alone before his owners bought Kiki to keep him company. Because of this time alone, Coco is not as confident and doesn’t always handle social situations correctly, but Kiki is there to give him a firm telling off if he steps out of line! 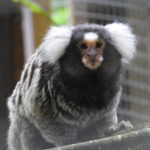 Kiki was born in 2016, and was sold at a very young age into the primate pet trade. She was kept as a pet in Wales for a year, along with Coco, before arriving at The Monkey Sanctuary in March 2017. Kiki is a young and excitable monkey, but also very intelligent, and is often showing Coco how to be a monkey. She is good at solving puzzles, meaning she gets treats much quicker than Coco does, and she always knows when her carers are there to give her something tasty! 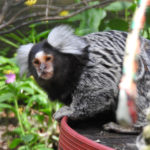 Disco was born and sold into the UK primate pet trade in 2010, and lived for seven years as a pet before arriving at The Monkey Sanctuary in November 2017. Disco is a very cautious monkey and doesn’t trust people very easily. He takes a lot of comfort from his sister Peanut who, despite their differences, is the one he truly trusts. They are both quite old for marmosets, but they both show a zest for life that proves that they want to enjoy their new life here and live it to the fullest! 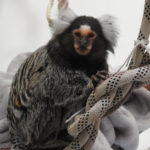 Peanut was born and sold into the UK primate pet trade in 2010, and lived for seven years as a pet before arriving at The Monkey Sanctuary in November 2017. Peanut is a bit more confident than her brother Disco, but is still quite nervous of people. Both of them really enjoy being outside, so neither of them are particularly happy when the weather is bad as this means they can’t go out and enjoy a good forage in the grass or a play in the trees! When the weather is good however, they hardly spend a moment inside! 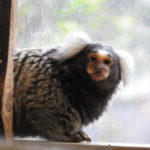 Jerry was kept alone in a small cage with little space to move and no monkey friends to keep him company for four years. He arrived at The Monkey Sanctuary in June 2017 to start his new life! He was initially a very nervous monkey, and with all the different sights and sounds he found it a little overwhelming at first.  Upon meeting Indie, however, he suddenly gained a new lease of life! He still had lots of social skills to learn, but as Indie had also been kept alone as a pet they were able to go on this learning journey together. 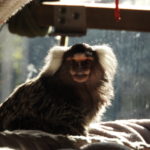 Indie is an elderly female who had been kept alone in a small bird cage for her entire 8 years as a pet. Confiscated by the RSPCA she made the journey from London to Cornwall to begin her new life at The Monkey Sanctuary. Initially she struggled to move around on the ropes and branches, but she was determined not to give up and before long became very agile!  She moved in with Jerry, who was also kept alone as a pet, and the two were able to build their social skills together. They now enjoy sunbathing together in the sun! 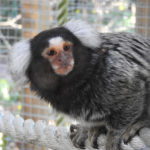 Finley (and twin sister Freya) were born into the pet trade in 2017. As pets they both lived in a tiny bird cage with little room to move. When he first arrived at The Monkey Sanctuary he struggled with the complexity of his new enclosures as he hadn’t moved around on anything but cage bars before. Thankfully, he was keen to learn and soon mastered marmoset locomotion. Finley has a bit of a naughty streak, but he is kept in line by his twin sister Freya. 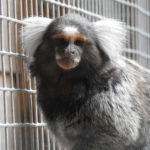 Freya (and twin brother Finley) were born into the pet trade in 2017. For a year they lived in a tiny bird cage before being rescued and arriving at The Monkey Sanctuary in 2018. Freya has taken on the role of dominant female in this duo, and she takes her role very seriously! She gets on well with her brother though, and they often spending hours chasing each other around and jumping into blanket hammocks for a play-wrestle! 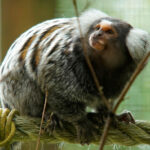 Jeff was born in 2014 and was taken from his family and sold into the pet trade at just 9 months old. Since then he has fathered 7 children with his partner Tilly, before being rescued and arriving at The Monkey Sanctuary in 2018. He is very protective of his family and loves spending time with them; whether they are foraging, grooming or playing he is happy as long as his family are near. Jeff loves food and will stop at nothing to always have the best food possible, even if that means stealing it from his own children! 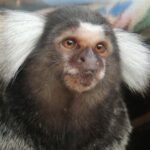 Tilly was born into the pet trade around 2010. We do not know much about her origins, but it is possible that she was used for breeding purposes, in order to provide the pet trade with as many baby monkeys as possible. Before she arrived at The Monkey Sanctuary, she was bought to keep fellow marmoset Jeff company, and together they had 7 babies. She is missing the majority of her tail, which she unfortunately lost during her time in the trade – but she is still able to get around just as well as the others! 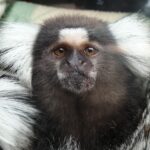 Frodo was born to Tilly and Jeff in 2017, along with his twin sister Pippin. Twins are the most common type of birth for marmosets, with triplets also happening often – a single baby is a rarity. Frodo is a huge fan of his dad Jeff, and he tries to copy him in everything he does. He loves to follow Jeff around and forage or play with him. He is missing the end of his tail which he lost during his time in the pet trade. 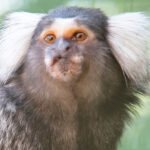 Pippin was born in 2017 to Tilly and Jeff. She has a twin brother called Frodo, but she finds him a bit annoying. Pippin is a very quiet and sweet marmoset, she prefers to take a back seat when it comes to monkey politics, and just lets the others all deal with the drama.  Her favourite thing to do is sunbathe – she can often be found stretching out in the sun, grooming herself or her family. She does love to play as well, and she has two younger sisters who are perfect for lots of fun games! 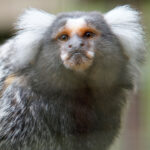 Needle was born at The Monkey Sanctuary in 2018 as her mum, Tilly, was heavily pregnant when she was rescued. She is quite low ranking in her family group, especially compared to her twin sister Sprout who rules the roost. She doesn’t mind this though, as it means she gets to spend more time relaxing rather than dealing with the important stuff. She loves playing and is often trying to coax her family into a wrestling game with her! 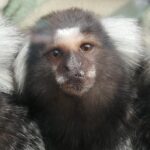 Sprout was born at The Monkey Sanctuary in 2018 along with twin sister Needle – as their mum, Tilly, was heavily pregnant at the time of rescue – in fact they were born just 3 weeks after their family was rescued! Despite being the youngest, Sprout has a firm belief that she should be in charge, and she can be quite bossy with her siblings. But they don’t mind too much as she also knows how to have good fun still, and that’s the most important thing to them.